I’ve not tended a vegetable garden in quite some time, so perhaps my enthusiasm had me filling my newly built raised beds with a few too many plantings for optimal yield. Combine that with an abundance of rain early on in the season and I had a veritable jungle on my hands in no time. The zucchini infringed on the cucumbers so quickly that all I could do was throw up my hands. The grape tomatoes crowded out the beans with such haste that all I could harvest was a couple of handfuls before they were swallowed up completely. At least the opportunistic groundhog was able to snack on the collard greens and Brussels sprouts before they too disappeared!

Notwithstanding these “difficulties,” we’ve enjoy quite a bit of natural bounty, and learned and relearned some valuable lessons that will hold us in good stead for years to come. One such lesson came in the form of a pleasant surprise the other day. Vegetable gardeners know well such surprises, I’m sure, like when that first pepper suddenly appears big and firm, as if overnight, or when you watch a certain fruit develop gradually that you’ve only previously seen fully formed in a supermarket. In this case I was looking for zucchini amongst the vines that had spilled over the lawn with such gusto that I’ve had to stop mowing that area. Well, here’s one! But it looks kind of strange. I plucked it from its grassy nest as if I were picking up a baby rabbit. It was a cucumber! 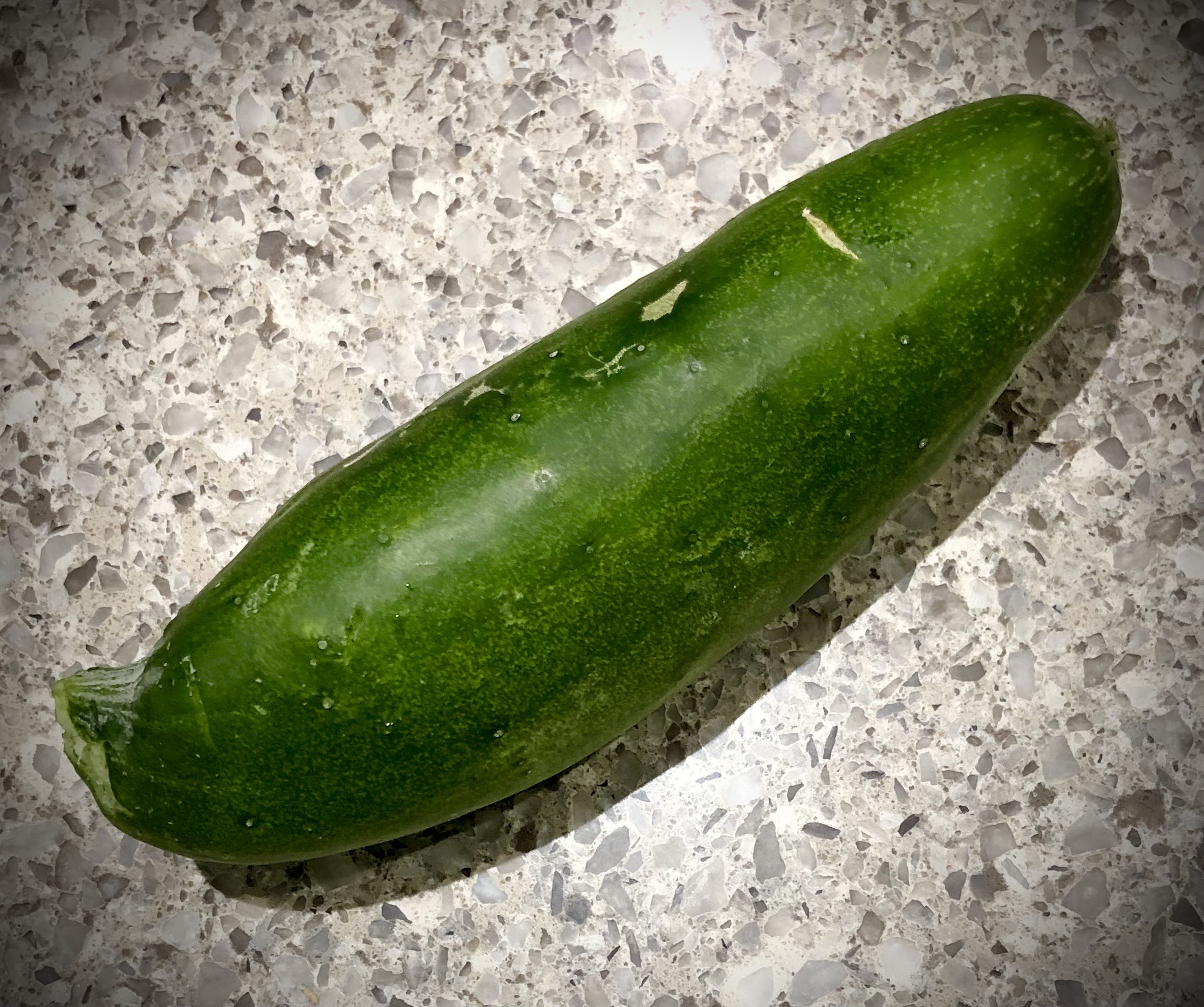 That cucumber plant that I’d thought was long gone was actually quietly doing its important cucumber work all summer long: reaching out from behind that monolithic zucchini plant, vining through the unmown grass alongside the raised bed, blossoming in the sunlight all the way over on the other side, and producing a piece of fruit that brought us joy, a nice cucumber salad, and this blog post. It reminded me of a quote printed on a bookmark that I’d picked up at Sanshin Zen Temple many years ago, one that has been nestled between some pages on my bookshelf ever since:

“When we see emptiness, we realize there’s no hindrance, no obstacles to block our life force. It is soft and flexible, like a plant that tries to go around a big rock and continues to grow. There is always some other way to live, to grow.” Commentary on the Heart Sutra by Shohaku Okumura, Roshi

Okumura is speaking of the Buddhist concept of emptiness, sunyata in Sanskrit. All things are empty of independent and enduring selfhood. The cucumber plant entertained no fixed ideas about growing right where it was planted, or shame for yielding its space to that “bully” of a zucchini plant, or prideful attachment to manifesting its best cucumber self by producing a nice bush of its own with much fruit to show off. Because the cucumber plant had no fixed ideas about the nature of its selfhood it was free to be whatever it needed to be to go on living in the best way it could.

This so-called emptiness of all things is good to keep in mind, perhaps especially in this day and age where world events are unfolding contrary to how we think they should unfold. We (and the world) might be well-served by considering emptiness whenever we’re feeling stuck, confined, diminished, overshadowed, frustrated, or otherwise thwarted from being what we think we should be. Perhaps there is another way to be. Or perhaps we’re already being in that other way, just as that cucumber came to be in another way, but we simply haven’t grown to accept it just yet. It’s good to have goals, plans, and standards by which to live. But let’s be open to being in other ways as well. Perhaps another way is the way that will be most beneficial to us (and the world) after all!